Skip to content
Girl Drama
--
Lost Boys
Get the Best of 2 of our Most Popular Seminars in 1 Day!
Lost Boys
Strategies to Help Educators Navigate the World of Boys for Academic Success
Mean Girls
Strategies to Promote Positive Relationship & Prevent Bullying, Cyberbullying and Relational Aggression
Previous
Next
Menu

Boys’ and girls’ brains may appear to be the same; but they are indeed somewhat different. Understanding the uniqueness of the male and female brain can help educators create opportunities to engage all learners in their classrooms.

Boys are held back in school twice as often as girls. They are expelled from preschool five times as often. Boys are diagnosed with learning disabilities and attention problems at four times the rate of girls. As they get older, boys are more likely to drop out of school, while comprising only 43 percent of today’s college students. As a result, millions of boys are being lost along the path to academic success and career achievement in today’s knowledge economy.

This strategy-packed one-day seminar will help attendees understand the neuroscience underlying the differences in how boys and girls relate to each other, to their teachers, and to academic tasks. Author, teacher, counselor and international speaker Steph Jensen will explore the latest research regarding how both boys and girls can be productively engaged in their learning. She will explore multiple specific strategies for activating the interest of boys and concrete solutions for preventing girl drama.

In this information-packed seminar, you will be able to:

With the ongoing concerns about COVID-19 (the Coronavirus), we want you to know that the safety and health of participants in this seminar is our top priority. Given the actual statistics and CDC recommendations, we are planning to proceed with the seminar and want to see you there. We’re also taking precautions to make sure the seminar is as safe as we can make it.

We are asking our attendees and staff to avoid handshakes, to wash their hands and to use Clorox wipes and hand sanitizer. These are all effective measures to prevent the spread of COVID-19 – as well as colds, flu and other illnesses.

Setting Up Boys for Success in Writing

The Importance of Verbal Affirmation for Girls

The Connection Between Screen time

"The presenter is clearly extremely well educated on this topic and did an excellent job. This is by far the best training I have been to in over 30 years of teaching."
Middle School Teacher
Richmond, VA
"The information on the the male and female brain as well as the chemical and structural differences between the two was extremely insightful and will help me be a better teacher!"
Elementary School Teacher
Cincinnati, OH
"Excellent training. I enjoyed the examples that were given to help illustrate the points and the information flowed very well."
Middle School Counselor
Orlando, FL
"This was an excellent seminar. I learned so many practical strategies to help my male students. This information should be brought to every school."
Middle School Counselor
Houston, TX
"I've been searching for ways to improve my effectiveness as a teacher to the boys in my classes and I've finally found some methods that will help me!"
High School Teacher
Jacksonville, FL
"I learned so much today and I have so many pages of notes on how to help the girls in my class. I cannot wait to get back to school and share them with my team."
High School Teacher
Wichita, KS 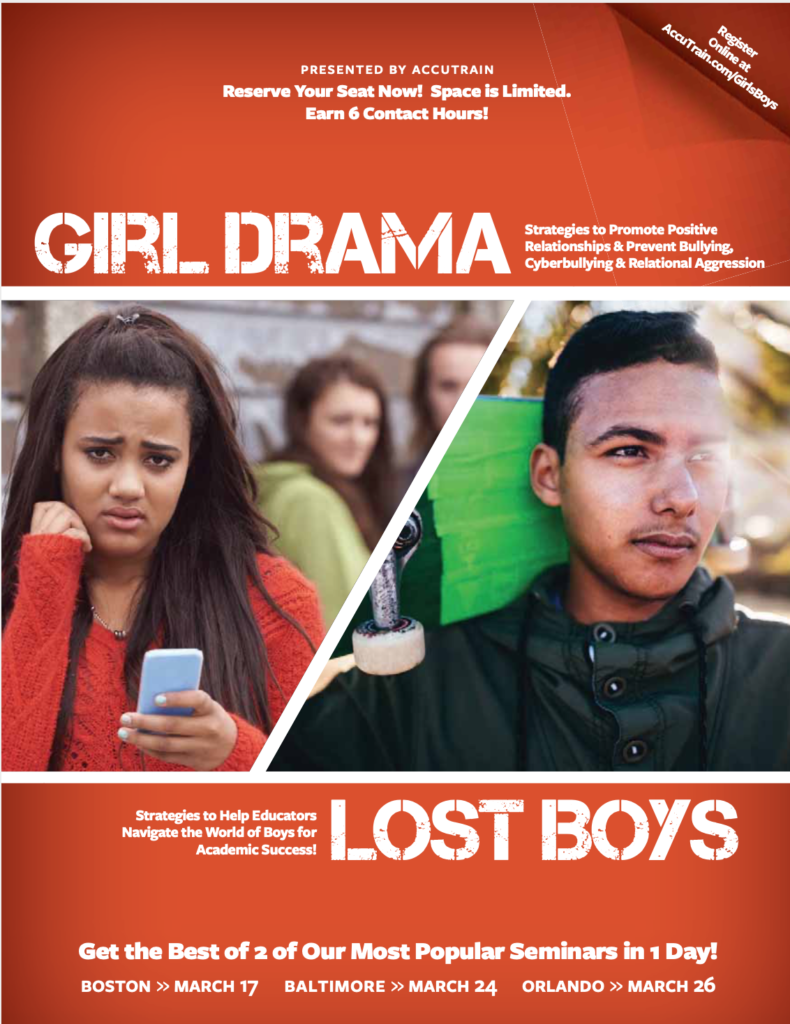 Certificates of Completion for this seminar, which indicate 6 contact hours of Continuing Education, will be available at the end of the seminar upon completion of a course evaluation.

In many cases, depending on your Profession and Jurisdiction, this Certificate of Completion is sufficient for tracking your Continuing Education and Professional Development efforts.

We suggest that you contact your local Board or Governing Agency to see exactly what steps are necessary for approval in your particular discipline. Please note that Developmental Resources is also an approved Provider for the following National and Regional Accrediting Agencies.

Your registration fee includes refreshments and materials. It does not include meals, hotel accommodations or parking.
Register 30 days prior to Seminar date and save! Groups of 20+, call 1-800-251-6805 for special pricing
GROUP DISCOUNTS
When 3 or more people register together from the same school district or agency, each participant is entitled to a $25 USD discount off their registration fee. To receive this discount, all participants in the group must register at the same time and have a single group representative as the contact person.
CANCELLATION POLICY
All cancellations incur a $20 administrative fee andmust be received in writing or electronically seven days prior to seminar. No refunds will be issued on cancellations received after that date. Substitutions are welcome at any time. Developmental Resources, Inc. reserves the right to cancel any seminar in the event of insufficient registration, in which case a full refund will be returned. If for any reason the seminar is not held, Developmental Resources’ liability is limited to a refund of the registration fee paid. If you miss the cancellation deadline, and are unable to either attend the training or send a substitute, we will issue a voucher that is valid for two years. It is transferrable to a colleague and may be applied toward any of our professional development events. 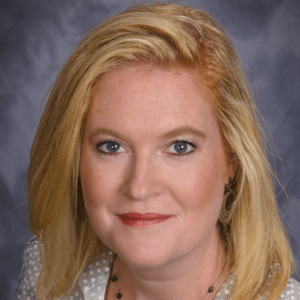 *In case of an emergency, another qualified presenter will substitute

Steph Jensen is an award-winning author and international speaker recognized for her insight and with research, practical strategies and humor to address challenging behaviors and build positive relationships with kids. She has held positions as classroom teacher, education consultant and international speaker. She holds a master’s degree in clinical counseling, focusing her efforts on adolescent and family issues. 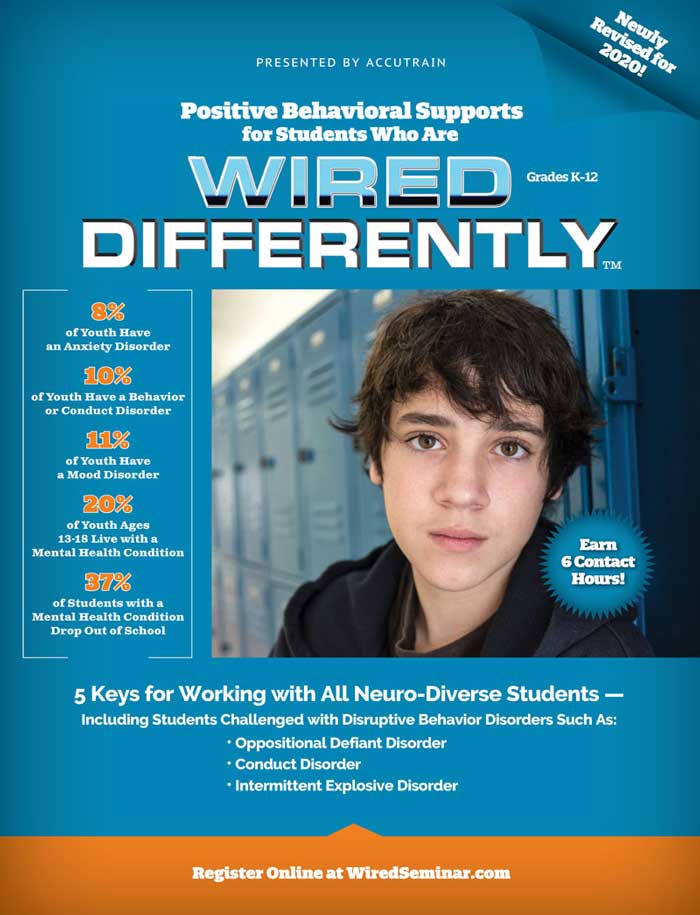 Positive Behavioral Supports for Students Who Are Wired Differently 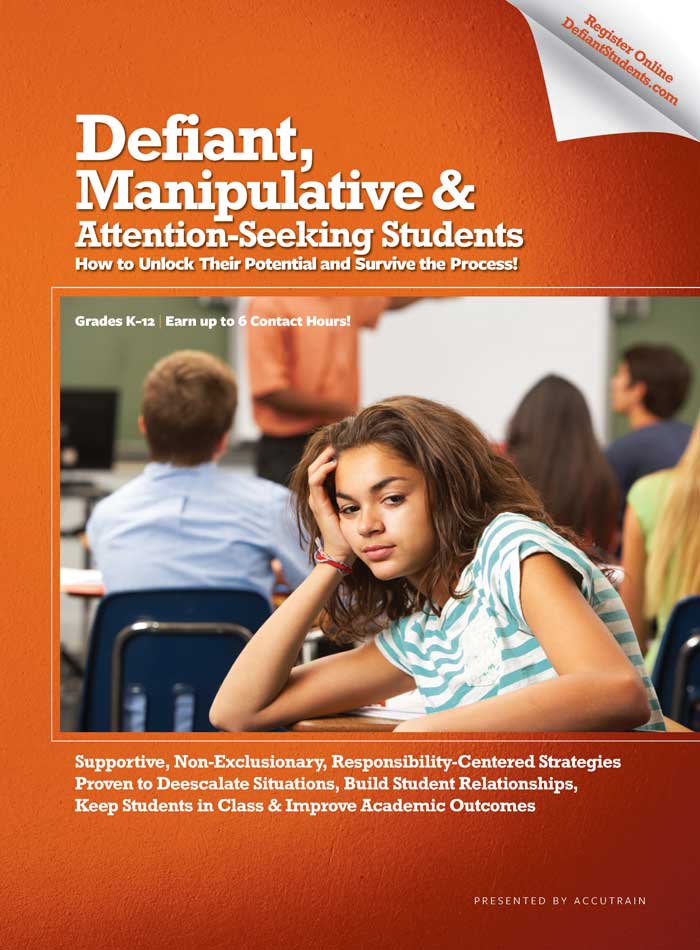